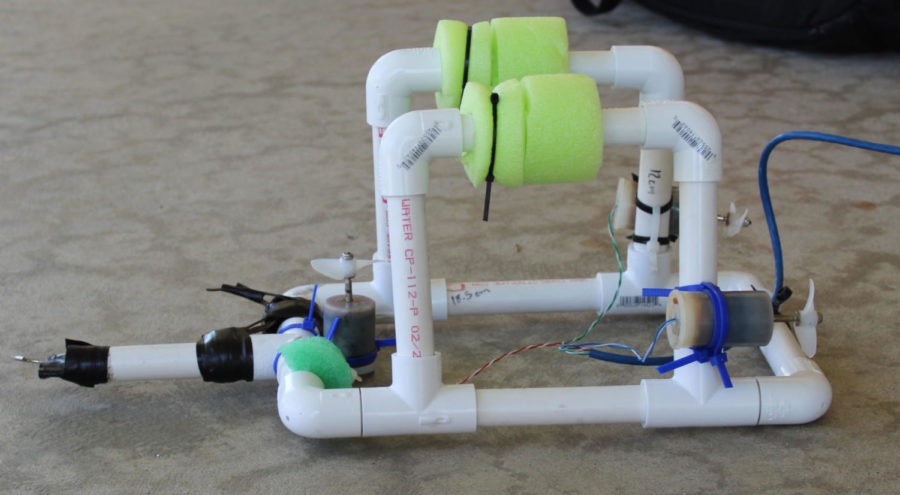 SeaPerch, a Navy organized club that allows students to build their own robots using provided parts at Arroyo placed 3rd out of 20 in the Southern California SeaPerch challenge on March 2nd.

Stacy Lim, club advisor, explained “it’s a regional competition and we all meet at Troy High School … in Fullerton. It was roughly over 20 schools and they each have like a time slot and they have their opportunity to do the obstacle course and mission recovery thing.”

The mission recovery “was reenacting an incident in Thailand in which a few children were stuck in a cave,” explained Marco Hernandez, club secretary.

“We had to create a robot that would pick up certain objects under water and take them to a certain destination under fifteen minutes,” Hernandez explained. Their robot had to pick up robot parts, and weighted orbs, the heaviest one weighing about 50 grams.

The other part of the competition was to go through a set of obstacles under 15 minutes. This included going through hoops. “We got a total of 6 minutes and 27 seconds which was decent for the conditions in which we were running at,” said Hernandez.

Along with completing these tasks, SeaPerch members must prepare an engineering notebook and answer questions before a judging panel.

“In that engineering notebook they have to write out their design for their robot … include the reasoning behind it, like physics and math all that stuff to prove why theirs [their robot] works,  why they chose … that design and then at the competition … they have to present their notebook and answer questions to a panel of judges,” explained Lim.

Hernandez explained that they also had to log the different trial and errors it took to make certain parts of the robot.

The robot takes about 4 hours to build, then the rest of the time is spent testing it. To test their robot, SeaPerch club members either go to a house with a pool or public pools like those at the YMCA. “We test on how buoyant it is. So if it floats too much, it’s positively buoyant … that’s good but then too much can not let the robot sink and pick up the things it’s supposed to.”

Hernandez said that his favorite part about SeaPerch was being able to build the robot and the mechanical aspect to it.

For more information about the club or to join see Ms. Lim in room 29.

For more information about SeaPerch go to: https://www.seaperch.org/index

(The club meets on Thursdays during lunch and sometimes after school in room 29 about once a month.)