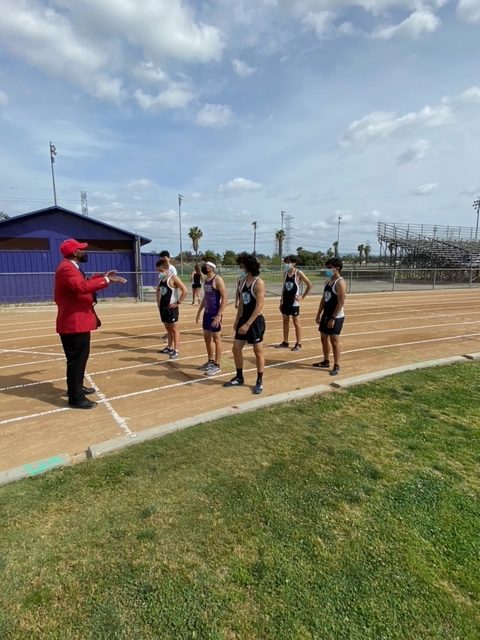 After months away from campus, Arroyo sports teams are now practicing and competing in Mission Valley League competitions.

Last Spring, when the pandemic forced many schools to transition to a form of remote learning, athletics was one of the many aspects of campus life put to a halt. In the fall of 2020, while Arroyo students continued to learn from their own homes, the district allowed fall sports teams to return to in-person practice. However, the pods were shut down due to the high number of COVID-19 cases in the area at the time.

“The Covid situation in our community, and on our campus, was a lot worse at that time. The EMUHSD, and its administrators, just didn’t feel the timing allowed for Fall coaches to get their teams safely prepared to play real games,” said Arroyo’s athletic director, James Singiser.

Then in mid-February, the District allowed spring and winter sports to return.  “When I found out that I would be able to return to practice, I was amazed and so excited! I was so happy to be able to get to see my friends and surprised that things were coming together so well,” said Amelia Rivas, a varsity cross country runner, soccer player, and track athlete.

Singiser described the fall, winter, and spring sports coaches’ leadership throughout the process of trying to get back on campus, “inspiring.” “From the Fall coaches that worked so hard getting kids and teams back on campus to end up being denied the opportunity to actually play. To the Winter/Spring coaches that have jumped through every hoop we have had to put in front of them,” said Singiser.

Although sports teams are back on campus, they look different than they did in pre-COVID times. “There was an entire Booklet of Return To Play Protocols (RTP) that was created by the School sites, the EMUHSD, in conjunction with the County of LA,” said Singiser.

Some of the protocols students and coaches must follow include mask-wearing at all times, temperature checks, social distancing, and bringing a water bottle. Indoor sports athletes must be tested for COVID-19 once a week to participate. Equipment was not allowed until recently, but in order to be used, it must be disinfected after every use.

“It is a massive amount of work, but we are getting it done, and students are getting to play. A huge thank you to Ms. Witt for her guidance and hard work through all of this just to give kids and coaches the opportunity to play sports again,” said Singiser.

As of April 21st, spectators at outdoor competitions are allowed at 33% capacity, an increase from the start of the season. Indoor sports teams are now allowed to have two household members come to competitions.

Rivas, who hopes to win some league titles this season, said, “There are slightly less races this year, and we do not have many opportunities to race on all-weather tracks. However, I do not exactly feel like I am missing out on anything. The team is a little smaller, but everyone there really loves what they do, and it is a fun environment to be in.”

A problem some Arroyo athletes faced this year was having to choose between participating in a spring sport or a winter sport.

Rivas had hoped to participate in both soccer and track but ultimately decided to run in track. “[I] thought it would be a good idea to be with the seniors for their last track season. Being on a team with them has been amazing, and it’s great to still get to be there amongst them this year,” explained Rivas.

Singiser had some advice for Arroyo’s student-athletes, “As the parent of an Arroyo Senior (Keeley)… have fun. Be safe and be smart, but have fun. This year wins and losses matter a little less, just to go out and be able to compete after the year we have all endured is a blessing. Enjoy it.”