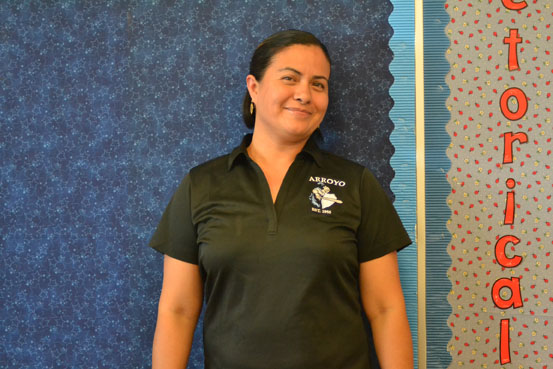 Where are you from?

I was born in Los Angeles but grew up in Durango, Mexico. I came back to the United States when I was almost 18, so I’m half from here and half from there.

What high school did you go to?

I went to high school in Mexico, but I went to Belmont High School for a semester my senior year.

How long have you been a teacher?

After high school, I transferred to LACC and when I finished, I transferred to UC Berkeley. I started to teach at Belmont High School in 2001 right after I graduated from college. The next month actually. I taught Spanish there as well.

I’ve only been here for a short time, but I love the students here so much. They are so respectful and responsible. I live very close to here, so this is my community. Hopefully this is the school that my son will come to and he will be here with me.

Why did you choose to become a Spanish teacher?

I always wanted to be a teacher. When I was growing up, I always played teacher, and I had great teachers that inspired me to follow their examples. There was one teacher I had for three years in elementary school that I got to know very well. He was also close to my family, and he talked to my parents to convince them to allow me to continue with my education instead of stopping after elementary school.

What would you be doing if you weren’t teaching?

Maybe I would be an actress. I like the drama part of the classroom, so I think it’s perfect for me to be here. I like to act a lot even if maybe I’m not the best actress. I will definitely go see the shows that are put on here at Arroyo.

What are some of your hobbies?

I love running. I used to run with Belmont and then with LACC. I tried to run with Berkley, but they were so fast. I injured myself in the first month trying to keep up with them. I spent one month working out with them and then five months of going to therapy. Nonetheless, I loved the mountains that they would run through. They would go so fast that I would get lost and be by myself. So I wasn’t fast enough for them, unfortunately, but I love running and would love to go back to it. Now I’m just walking and probably need a bicycle to catch my kids who are 2 and a half and 9.

What kind of music do you listen to?

I like spanish rock and my favorite group is Mana. I try to incorporate that into my teaching so my students will get to know Mana by the end of the course. Mana is coming around here soon but unfortunately I didn’t buy the tickets, so I will just listen to my CDs instead.

What was your least favorite subject in high school?

I would say Physics, it was too confusing, and I feel I just didn’t like it. I loved literature and I would dream about what I was reading in class so I was so excited to see my new books. When they were new I would smell the books. But not the Physics one! Like “here we go again, it’s coming back, I better be ready” but yes, I didn’t like Physics.

What was one of your favorite high school memories?

While I was in Mexico, the students would have their own room and the teachers would come in. We were like the owners of the room. Also, we were the same group of students throughout the three years 10, 11, and 12. I remember there would be days that we all went on little adventures together. We still keep in touch and are friends on Facebook, and we try to see each other as much as possible.

What are you involved in outside of school?

I was invited to be a part of the Spanish club but I haven’t gotten around to it just yet. I went to go see the cross country team as soon as they started but that’s about it. I am pretty much a mom 24/7. Being a mom is wonderful and hectic and rewarding all at the same time. You won’t see your life in the same way as you would as a single person. It’s not marriage that changes your life; it’s being a father or mother. Once you are a parent it’s like seeing life through new eyes, and you’re living again through the eyes of your children. Everything is new for them and for you.